Enhance Your Sites with CSS3 Animations

The W3C’s CSS ‘Animations’ module has taken a while to catch on. With limited browser support, it has not proven to be one of the mostly widely used CSS3 properties. It’s been available in Webkit based browsers for ages – Chrome since version 2 and Safari since version 4, but no support in Opera, IE and Firefox… until now. Firefox 5 however came out recently and with it came support for the animations module. Rumor has it that Opera will follow. With global support for the feature now estimated at around 25%, it’s time to start having some fun!

This article provides an introduction to CSS3 animations and an explanation of the syntax involved. We will then take a look at a more advanced use of CSS animations before finishing with some ‘real world’ animation ideas and how you can apply these to your sites today. 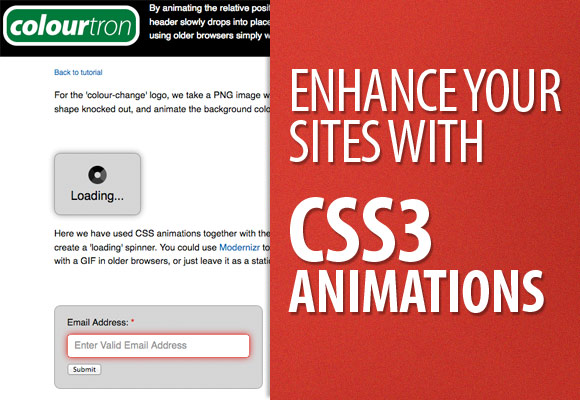 What are CSS3 Animations?

CSS3 Animations consist of a series of different visual states for an element to adopt in order. To define each of these states, a number of keyframes are set at intervals across the duration of the animation. These intervals are defined using percentages and each interval will introduce one or more CSS styles. The animation must then be attributed to an element and various options relating to how the animation should play can be set.

In the below example you can see that we have defined three different states for an element to adopt at different points in the animation. We have given it an identifier of ‘colours’.

Note: In the W3C working draft the animation identifier is contained within single quotes. Firefox doesn’t seem to like this and only works without the quotes. Webkit works with or without quotes.

To activate the animation, all that needs to be done is to apply the animation-name CSS style to the element to be animated. In this example we have applied the animation ‘colours’ to the element. This will make the background of our web page slowly change colour from red to green to blue. Animations come with a set of defaults and to override these we have set the animation-timing-function (transition style – e.g. ease-in, or see custom cubic-bezier timing functions), animation-iteration-count (number of times to repeat) and ‘animation-duration’.

Animation styles can also be written out in shorthand using just animation followed by a list of properties. For a full explanation of all of the different CSS3 animation properties, see the W3C draft.

Note: The above example won’t work if you simply copy and paste the styles. CSS3 animations require browser prefixes. These have been stripped out of this example for clarity. –webkit- must be placed in front of Chrome/Safari styles and –moz- must be placed in front of Firefox styles. This is slightly annoying as it means that animations must essentially be defined twice (or three times if you wish to provide a future-proof version without any prefixes).

Diving in at the Deep End…

Madmanimation by Andy Clark et al is a fantastic example of how CSS3 animations can be used in a more advanced manner to actually create a short movie. To take a very simplistic overview, this basically works by attributing each animation to an element with a class of .go added to the CSS selector. For example:

The .go class isn’t present in the HTML mark-up so the animation doesn’t play on page load. The .go class is instead injected via JavaScript into the HTML at intervals. As soon as an element receives its .go class it can then play.

It is well worth picking through the well-commented HTML, CSS and jQuery to further understand how it has been done.

An application called Animatable is on its way from the team behind Madmanimation. This is essentially a browser-based GUI for creating complex CSS animations.

CSS3 Animations for the Real World

Whilst sites such as Madmanination are very impressive and demonstrate the huge potential of CSS based animations, these ideas are not particularly useful for creating movies today. With potentially three-quarters of your users not being able to see your movie because of browser incompatibilities, you are probably better off spending your time developing a more accessible solution with JavaScript, Canvas or Flash.

Like other CSS3 properties however, animations can be used as part of a ‘progressive enhancement‘ strategy. Subtle use of animation for non-crucial effects can provide a finishing touch that can turn a site from good to great. Check out Kaleidoscopeapp in Chrome or Safari. Notice the slowly moving colour wheel in the logo? It’s cool right? This could be achieved with a CSS keyframe animation.

I’ve created a demo page demonstrating five very quick and simple ideas for CSS3 animation enhancements you could apply to your designs today. I have shown the complete code (-moz- and –webkit- prefixes) in the first example. For the remaining examples I have just shown the Firefox versions. The source code of the demo shows both.

Note: Must view in Firefox, Safari, or Chrome.

By animating the relative position of the