Polygon Graphics – What They Are, Examples and Tutorials

Would you like to know more about polygon graphics? What is it used for? How to create something of the kind? Yes? You are a real web design professional always open to new knowledge and techniques! Of course, polygon graphics can’t be called something brand new or revolutionary, however, it can help you vary your designs; make them more unique and recognizable.

In our blog post you will read some useful information about polygon graphics in general, view several brilliant examples of its usage and learn how to create such small chef-d’oeuvres yourself. Who knows, maybe you will cope even better than experts whose works are featured here… What is a polygon?

We’ve got several rather confusing definitions from different sources here, but reading them all, you’ll understand the essence.

Did you grasp the meaning? We hope so. Yes, we know definitions always sound rather complicated, but, in fact, the object of today’s interest is rather simple and we are ready to go on to the next step.

The answer is simple as ABC. Polygons are popular in the digital world. They can be called a kind of peculiar digital art. Polygons impart your image or text in a unique 3D, retro style. Initially, polygon graphics were used for creating 3D models and scenes in videogames because of their render speed, which was achieved due to low polygonal resolution.

As a rule (but not always) polygons are triangular. They arise when an object’s surface is modeled, vertices are selected, and the object is rendered in a wire frame model. The technique is quicker to display than a shaded model. Skilful digital artists even learn to avoid seams in polygon design.

What software can you use to create a polygon illustration?

If you want to produce a polygon illustration, you can use basically any 3D software you have mastered. Very often, developers choose Cinema 4D due to its versatility and simplicity when it comes to modeling, lighting and visual effects. This software is good for babes and sucklings, while other tools like Maya or 3ds Max require much more expertise.

Actually, polygon graphics are not too sophisticated in creation, especially in comparison with architectural visualization, photorealistic renders or any animation techniques. They resemble the early days of computer modeling and animation, polished with modern techniques. Retro style is always in vogue and, virtually, everything designers do is based on old-school techniques.

As you know, all 3D models are made of polygons. The more polygons your model has, the more detailed and aesthetically appealing it will look. Usually, after final rendering touches, the image acquires a smooth appearance of continuous surfaces. Using fewer polygons in the modeling stage, you can create a simpler, more abstract model. The technique is often combined with a special rendering style which rather than trying to smooth out the polygons, renders each of the facets of the model, making the image blocky and angular, which looks really weird.

As you see, everything depends on the effect you want to attain. Nevertheless, polygon modeling can’t be called low-resolution. Sophisticated rendering techniques, lighting effects and shadowing help the artist to create a highly realistic appearance of the simplified object. A polygon illustration is similar to paper-craft or origami. This style is at its peak nowadays.

An antagonist to sleek design

Just agree that something that exceeds the limits of common standards always grabs public attention. Polygon graphic design can be considered a singular reply to the recent tendency of computer modeling perfection. Protest is in artists’ nature. Real geniuses think figuratively and try to express their world outlook their own way. They don’t copy reality, but present its essence abstractedly, which makes us muse upon fall to thinking.

Did you know that polygon design has an historical precedent in art? It was at the beginning of the 20th century. It was the time of multiple expressionist movements emersion. The advent of photography influenced this art tendency very much. As photographs could capture an exact image the need for accuracy in art seized its topicality. Expressionists could focus on conveying feelings and sensations rather than precise representations. Today abstraction and expressionism are flourishing both in real and digital arts.

Below, you will see some outstanding examples of digital polygon graphics. Maybe they will inspire you to create something yourself.

Iron Man
If you are a movie fan, you’ll definitely appreciate this illustration. The Kingdom – The King
The royal spirit of this grand animal is perfectly rendered. Liberty
Don’t you think that this interpretation of the Statue of Liberty is at least worth your attention? Portrait of Lil Wayne
Just look at his teeth… the work is beyond any praise. Portrait of Roger Federer
A smiling guy, isn’t he? We hope these incredible examples stirred the desire to create something like that or even bettering your hearts. Below, you will find Photoshop tutorials teaching the basics of polygon design art.

We would be happy to hear if you have found something interesting in our blog post or tutorials. Please leave us a message about polygon design: what do you think about it and were the tutorials helpful for creating anything worthwhile? You can share your nice polygon works also.

As for us, we believe that polygon design is a kind of creative mixture of retro and futuristic aesthetics. We can’t call polygon design a current trend, like the flat culture that has flooded the web. Rather, it’s a tendency that is out of time, which turns out to be very helpful when you want to stand out from the crowd and create something really exceptional. 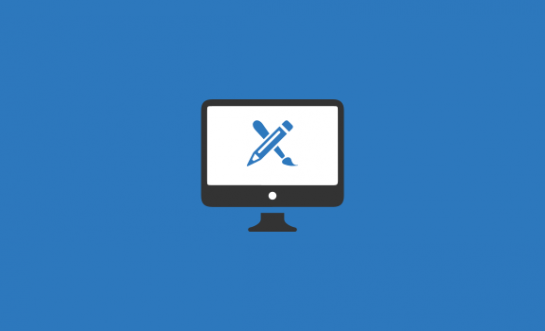 5 Web Design Trends You Need to Know About in 2020