September 25, 2018 in Development by Anna Monus

As we live in the digital age, programming skills become increasingly important on the job market. Although not everyone will be a programmer in the future, basic coding skills will be necessary in many fields. Currently, there’s no consensus about the exact age when children should start to learn programming, however there are already many coding apps on the market for different age ranges. Some of them can be used by very young children who can’t even read, while others were designed for older students who have a solid knowledge of mathematics.

In this collection, we are going to have a look at the best coding apps for children so that you can choose the most suitable one for your own kids.

Scratch is a visual block language created by Google and the MIT Media Lab. Originally, Scratch was designed for children between the ages of 8 and 16. However, it has become so popular that people of all ages use it to get started with programming. In Scratch, each visual block stands for a logical unit, such as an if-else statement, a function, or a while loop.

The Scratch website hosts a whole ecosystem, including the coding app, tips, galleries, educational videos, and many other things. Users most frequently create animations, interactive stories, and online games with Scratch, however the possibilities are basically endless. Scratch also has a large community who share their work with each other and collaborate on projects. 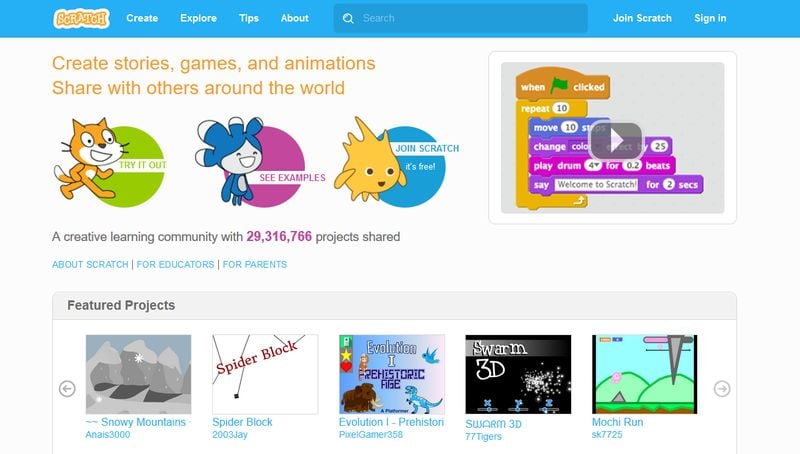 Code.org is a non-profit initiative that helps children learn computer science all over the world. The app runs in the browser and all courses are free for everyone. Code.org categorizes its courses according to age groups. Children from kindergarten to the 5th grade learn how to code simple drawings, games, and stories. Kids between the 6th and 12th grades gradually start learning HTML, CSS, and JavaScript. Although there aren’t any on-site courses for university students, Code.org recommends them suitable courses from other sites like Lynda.org and Udacity.

Code.org also offers a solution for children who don’t have time to take a full-length course. The “Hour of Code” project allows students to follow through one-hour tutorials that teach coding with the help of popular themes such as Minecraft, Star Wars, and Frozen. 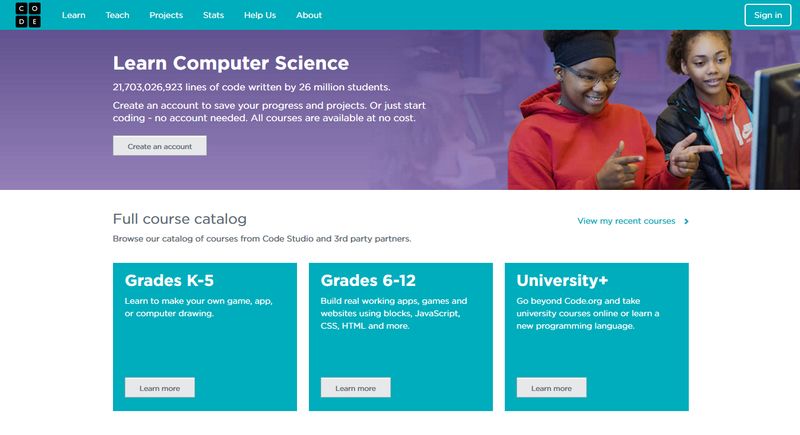 Tynker is a creative coding app for children above the age of 7. As its name suggests, it encourages kids to tinker with code. Similarly to Scratch, Tynker is also a visual programming language that comes with Lego-like building blocks. Each block teaches a different coding concept in an intuitive way. Tynker mixes learning with entertainment by using visual elements and characters that get children’s attention. Moreover, they can learn to code robots and drones as well.

Tynker teaches them critical thinking skills while keeping them engaged by completing missions, collecting trophies, and solving coding puzzles. It also offers courses for older kids who already know the basics. They can learn JavaScript, Python, and Swift. Moreover, parents can follow their child’s progress from the Parent Dashboard. Although Tynker doesn’t come for free, it has affordable plans starting at $8/month and offering a multi-child discount as well. 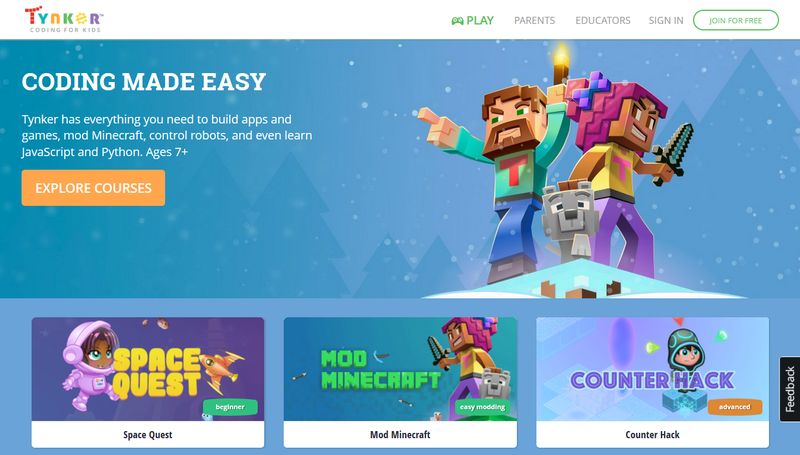 Kodable hosts coding lessons and games for children from kindergarten to the 5th grade. The primary goal of the project has been to help elementary school teachers bring programming into the classroom. However, parents can also excellently use it to teach their children coding in an entertaining and engaging way. Kodable’s teaching guides are very well designed, so educators without any coding experience can use it.

Kodable sticks to the syntax of JavaScript which is an excellent language for beginners. Older kids can take JavaScript classes as well. It leads students through programming concepts using different games and challenges such as navigating a labyrinth. Kodable improves crucial skills like computational thinking, communication skills, social-emotional learning, and many others. It has a web-based and an iPad version as well—both come for free. 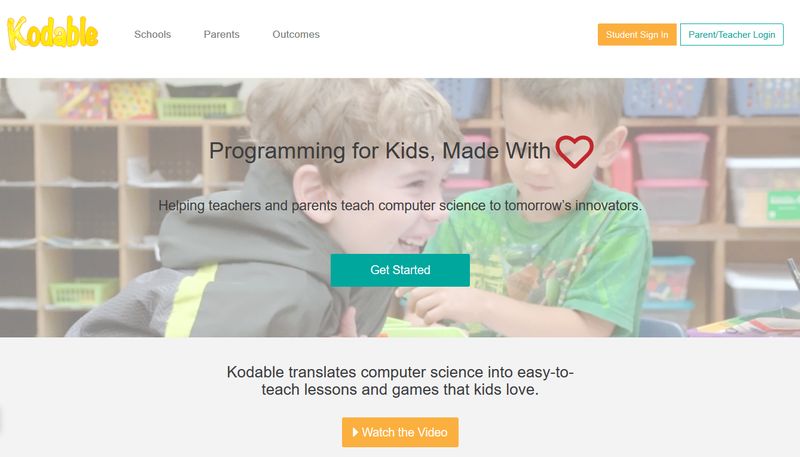 The Alice Project is an easy-to-use block-based programming environment created by the Carnegie Mellon University. It has a beautiful drag and drop interface that helps children learn the fundamental concepts of programming and even introduces them to the basics of 3D game design. Alice is free for every user and the creators have put a huge emphasis on diversity and accessibility as well.

By creating animations, building interactive stories and online games, children learn the basics of object-oriented programming. As most modern programming languages use the object-oriented approach, Alice is an excellent tool to help kids understand the concept in an intuitive way. Alice has already been around for about 10 years and it’s currently at version 3, however you can download Alice 2 as well. The creators recommend Alice 2 for younger ages, while Alice 3 is suitable from about the 6th grade on. Alice 3 gradually transitions from block-based coding into text-based Java coding. 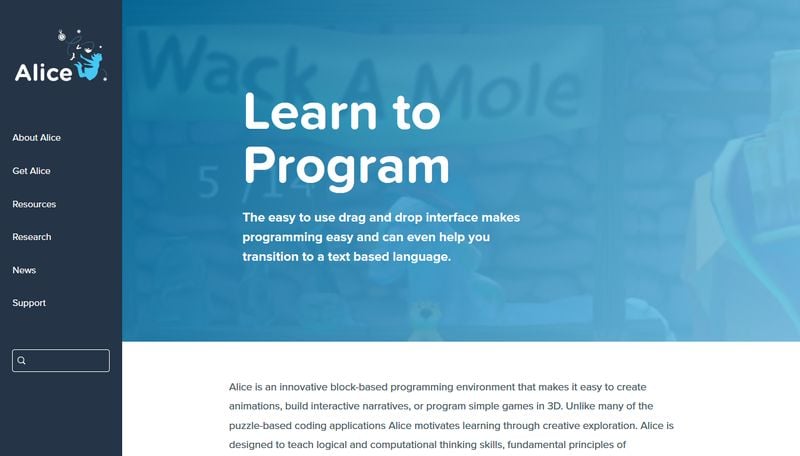 With CodeSpark Academy, children between 5 and 8 can learn programming at their own pace, without any external help. CodeSpark Academy combines learning and playing by making kids solve complex computing problems without them even knowing it. The app presents them with a virtual world inhabited by friendly characters called “foos” and an antagonist called “Glitch”. Kids need to program the foos to solve challenges, build different things, and protect themselves from Glitch.

CodeSpark Academy has been tested with children from a wide range of socio-economic backgrounds. The creators also paid attention to make the app appealing to girls as well. They also made useful helping material for parents and teachers. You can download CodeSpark Academy for Android and iOS devices. It is available for $7.99/month, however it has a 7-day free trial. 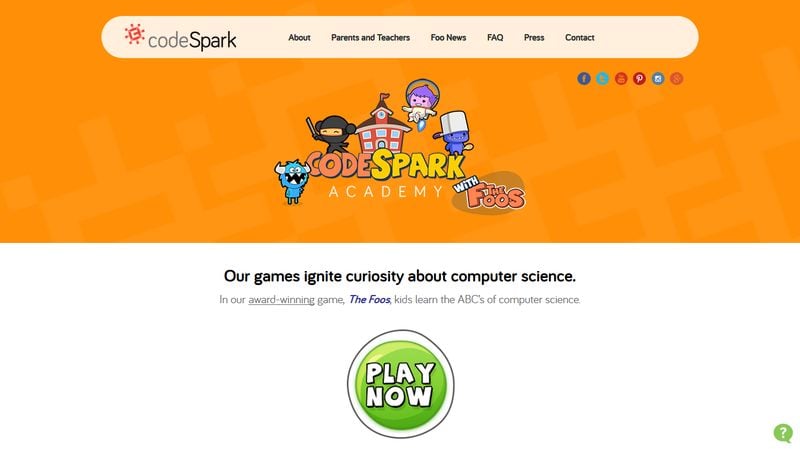 Code Karts introduces young children to programming with the help of an engaging race car game. You can use this app with kids as young as 4 years old. Code Karts make children solve a series of logical puzzles. They need to use direction bricks to direct the car to the finish line. While doing so, they constantly need to make decisions, observe the track, explore their options, and overcome obstacles. Each obstacle presents a programming concept, for instance if-then statements.

Code Karts has 70 levels, 10 of which are available for free. Children can also choose from two different game modes: classic and competition. The latter is for more advanced players, as they can race against the device. The Code Karts app is available on Amazon, in the App Store, and on Google Play.

Hopscotch is a free programming app for iPad, with already over 10 million downloads in the App Store. Hopscotch has been designed for children over the age of 8. It allows them to create their own app or game using a kid-friendly drag-and-drop user interface. The app is truly interactive, as they can move around the blocks inside the app by tilting, tapping, or shaking the iPad. Children from all over the world have already made more than 26 million games, apps, and stories with Hopscotch.

Hopscotch also provide children, parents, and teachers with self-paced video tutorials that show them how to create popular games such as Pokemon Go and Crossy Road. Hopscotch also has a fully moderated online community that allows children to interact with the creations of other kids. 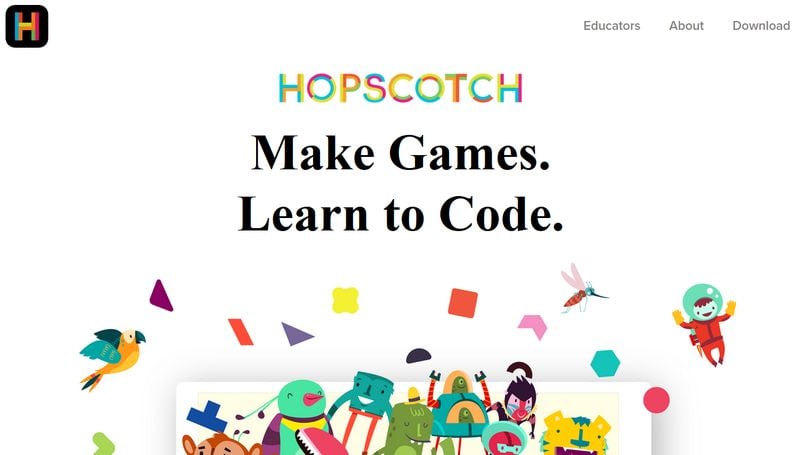 Daisy the Dinosaur has been made by the creators of Hopscotch. It’s also a free coding app for the iOS platform, however with a little dinosaur as a protagonist. It’s recommended for children above the age of 7. Daisy the Dinosaur covers the basics of coding such as objects, sequencing, and loops. According to the creators, Daisy is a good preparation for kids to later use Hopscotch. When they are confident with Daisy, they can move onto Hopscotch with ease.

The app has two gaming modes children can choose from: a free-play mode and a challenge mode. In free-play mode, children can give different instructions to “Daisy” by dragging some commands over to the program box. When they run the program, they can see the effects of the instructions on the screen. Challenge mode takes children through different tasks. It’s recommended for older kids who can already safely read. 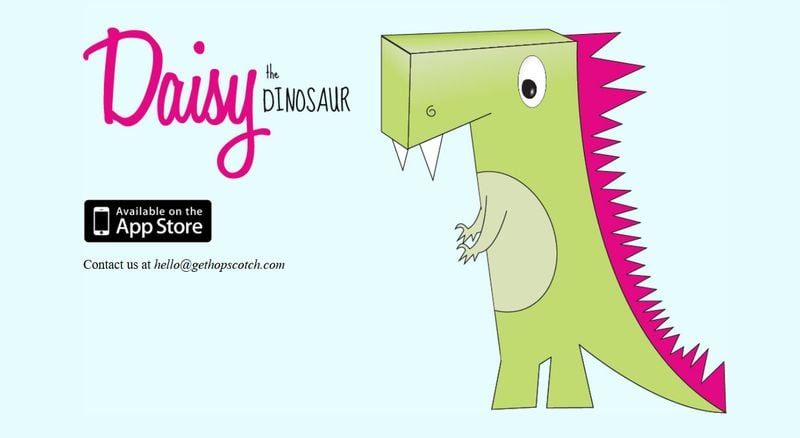 Waterbear is an open-source app that intends to make programming more accessible and fun to children. It provides kids with a visual language so that they can start coding without having to learn a syntax. Waterbear’s creators have been inspired by MIT’s Scratch language. However, the app doesn’t simply recreate Scratch but has its own logic, controls, sprites, actions, and other building blocks.

Waterbear has a JavaScript playground that runs in any web browser. In the playground, children can create Waterbear scripts and see the JavaScript code it generates. Waterbear is totally free and the source code of the app is available on GitHub as well.

In fact, it’s hard to tell which coding app is the best for children, as every kid is different. If a child doesn’t like a particular app it’s still worth giving a try to another one. However, it’s important not to stress them out too much, especially at a younger age.

If coding is too much for your kid right now, you can start with child-friendly non-programming websites that have been designed with the needs of children in mind. And, if you want to pick up some programming knowledge yourself we have a great collection of the best coding apps for adults as well.