Evolution of The Camera

April 22, 2015 in Inspiration by Rahul Chowdhury 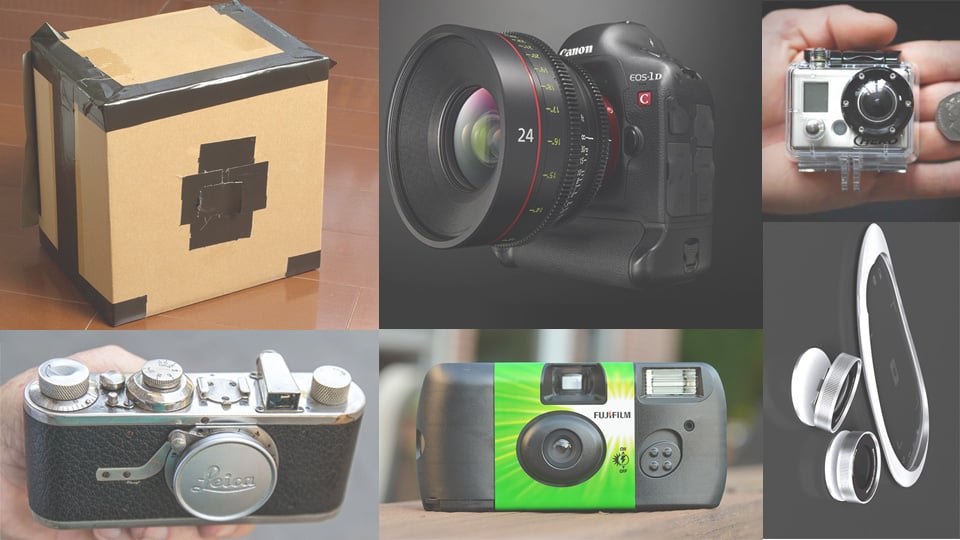 Among various other stuff that we own and use a lot, cameras definitely play an important role in our daily life. We freeze great moments from our life in the form of photographs using this little tool, and for emotional beings such as us, this means a lot.

However, it took a great deal of time to make the camera that we use today, be it as a small module on our smartphones or compact point and shoot cameras or the mighty DSLRs.

How The Camera Has Evolved When Mozi, a Chinese philosopher observed rays of light falling on the walls of a darkened room through a pinhole made on the opposite side, he saw the world outside as upside down. Mozi was fascinated by this fact, and upon proper research he reached the conclusion that since light travels in a straight line, thus such a phenomenon take place in nature. This was the building block for modern cameras and photography. Mozi’s method of projecting an inverted picture through a pinhole was marvellous, but sadly there were no means to store the end result which made it sort of useless.

However, in the year 1839 Louis Daguerre, a French artist developed a process to actually store the projected image forever on a shiny mirror finished copper plate treated with chemicals. This was the first time an object was made to be light sensitive to capture information on it and store it forever by treating it with chemicals. Daguerre made the process public in return for a lifetime pension, and this process paved the way for the film cameras that we have used in the past.

Cameras were one thing everyone wanted back then, but the only thing coming between these devices and photographers was the fact that cameras were bulky, heavy and unattractive boxes.

In the year 1900, The Reise Camera changed it all. This was the world’s first truly portable camera, with its ability to be folded into a compact shape and being extremely light weight as compared to other models available on the market, this was the thing for people who were looking to travel around and shoot photos. You may have heard of 35mm films, the standard format for film photography for decades. Leica I was the first compact camera that packed a superb f/3.5 lens and was able to shoot photos on 35mm films.

Modern cameras that we use today started to come into existence at this stage. While more and more new cameras were being launched onto the market, a camera became a household object everywhere.

However, the whole process of taking a photo and developing the final photograph from the negatives was a tedious and time consuming job.

A company named Polaroid recognized this problem and decided to compress this whole process into a matter of seconds.

Thus came Polaroid Model 95 onto the market. With this camera photographers could just take a shot and get the photo printed on a special paper supplied by Polaroid itself in minutes.

Well, at this stage, instant photography was a reality and gave a new turn to the evolution of cameras. Cameras have moved from bulky boxes to portable ones, and the lengthy process of developing a photo has been zipped to a few minutes.

However, in the year 1975, Steven Sasson of Kodak, developed the world’s first digital camera. It was a modified version of a Nikon SLR, coupled with a digital CCD sensor used to capture light information, and a tape recorder meant for storing the processed photograph.

This invention showed the camera industry a glimpse into the future, with everything being digitized and things being done at less time. However, it was in 1991 when the first digital camera was made available on the market at a hefty price tag of $13,000 for people to buy. Though cameras had evolved a lot in all these years, there was still one thing that was keeping this superb device out of the reach of many around the world – the price.

Fujifilm, a film and camera making company completely shattered that barrier by inventing the world’s first single use disposable camera, the Fuji QuickSnap.

However, taking into consideration its performance and the number of shots it could take at that price point it was really very economical. There was no doubt that cameras were getting smaller, more advanced and even digital as days were passing by, but how compact one could have imagined a camera to be back then?

Apparently small enough to fit on a cell phone and take pictures on the go. Sharp introduced a cell phone in the year 2000 which had a tiny camera installed on the back panel and which could shoot, process and display photos on the cell phone display instantly.

This was the world’s first cell phone with an inbuilt digital camera, and it paved the way for today’s cell phones which boast high quality digital cameras on their back. With the invention of a revolutionary smartphone, the Apple iPhone in the year 2007, digital cameras in cell phones got a new life.

The iPhone camera had superb imaging technology and delivered great photos in every lighting condition.

It was capable enough to give traditional point and shoot digital cameras a run for their money, and turbo charged the growth of tiny cameras. While everyone else was focusing on creating cameras that were to be used to capture indoor and outdoor moments by regular customers, GoPro was trying to develop something for the people who were more adventurous and were looking forward to capture their adventurous moments.

With HD HERO, GoPro introduced a camera that was able to shoot videos at 1080p and could be taken along with you on mountain biking, surfing or any other adventurous sport that you can think of.

Do you know, when Felix Baumgartner jumped from space the whole event was recorded with the help of 6 GoPro cameras strapped to his suit? Talk about tough, GoPro can beat anyone. We surely have come a long way from the year 1500. But is this the end of this fabulous development? Certainly not.

Imagine if you could in the near future have the raw power of a DSLR put into a camera the size of a coin. A designer named Funamizu imagined this and even designed a 3D model of how it might look, if implemented. This little camera would be attached anywhere and would transmit captured photos wirelessly to nearby devices instantly. Just imagine how cool would that be?

It would solve the problem of carrying a bulky DSLR to places, when you could have a coin sized DSLR right inside your pocket.

Though there isn’t any official development going on for this idea, let’s hope it becomes a reality. And if it does, this will be a major leap for the photographic industry.

After all these years of advancement, cameras now have superb power, portability and are packed with numerous features to allow us to shoot a moment and share it with the world in a matter of seconds.

Moreover, now billions of people have a camera with them and are capturing their best moments every day. It has become a part of our daily life. How to you use cameras in this digital age? Do you carry a camera when you are out and about, or do you simply use your smartphone for your on-the-go snapping? Please share your opinions with us in the comments below.